Please to advise that Halle is a mum. Grand Champion Tambuzi At Light Speed (Halle) safely delivered 6 puppies today, 29 May 2015. We have 2 red and white girls and 4 red and white boys. All puppies were delivered without problem and all doing very well. Halle is an exception mother - she just adores puppies! 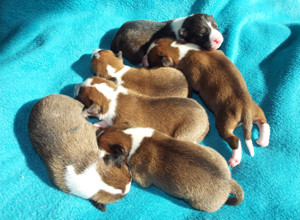 The Basenji season came exactly a month early at Tambuzi. With Sierra followed by Willow then Halle coming into season. Obviously they had not looked at the calendar! There is much debate about the Basenji, which estrus once a year unlike its domestic counterpart which have two seasons each year. Is the season linked to the number of daylight hours, temperature, food availability or rainfall? Here in central Victoria we have had a very long spell without any 'ground wetting' rain. There isn't any green grass to be found in fact most of the dead shoots have been eaten by birds so the property resembles a ploughed field. Other plants are dead or struggling but that is much like most other years. Days are bright and sunny again most like the average. Temperature has been fairly consistent, we had a number of extreme temperature days earlier in the year.

A mating for Halle (Grand Champion Tambuzi At Light Speed), which will be her last had been well considered. Last year, after seeing him at the Victorian Basenji Specialty, I decided I would approach Ethel Blair of Wuliango Basenjis in Qld to use her dog Ch Wuliango Sweet Dandelion (AI) (Leo). At the Victorian Basenji Specialty in 2014 Leo came in second to my Harry being of a similar type with what the judge considered in her critique as having better angulation than those placed lower in the class. I felt that he would meld well with Halle. Leo's magnificent pedigree was also a consideration in my selection. I have admired American Grand Ch Reveille Push The Limit To MC SDHR (grand sire) for quite sometime. Although I have not seen photos of all his litter mates all 6 became champions of grand champions. Of those I have seen American Grand Ch Reveille Push Button and American Ch Tricycle Two are also quality Basenjis and a credit to their breeder Damara Bolte. The quality of the pedigree continues with Am Ch C-Quest's Just Push Play SDHR, Am Ch Reveille Boutonniere SDHR and further back Am Ch Djakomba's Spotlight SDHR to name just a few. Then to add a little of the 'unknown' Leos grandmother Avongara Luka is a recent export from Barango, Democratic Republic of the Congo.

Health was another key consideration with both Halle and Leo being normal for fanconi syndrome and late on-set progressive retinal atrophy and Halle being normal for pyruvate kinase deficient (Leo's test results pending) thus eliminating the prospect of one of the puppies being affected by any of these diseases. Hips and eyes have also been evaluated all with very good results.

Halle progressed her season very quickly with an unusually (for her) steep rise in her progesterone level and was ready before the flight to Brisbane was booked. As a 'plan B' not knowing if it would be 'too late' when we eventually got to Brisbane I mated Oscar (Tambuzi Totally Taboo) to Halle. However, the likelihood of this mating 'taking' is extremely slim. I did a similar double mating in 2010 and on that occasion Oscar did not produce any offspring. All puppies I breed are DNA profiled at about 6 weeks, at the time the microchips are implanted, so identifying parents is not difficult exercise. All puppies will be sold with a parentage verification.

It will be a few weeks before we know if the breeding has been successful. More about this breeding can be reviewed here.

The Sunbury Canine Club Show is the largest one day show in the Southern Hemisphere. 2013 attracted in excess of 2100 entries. The breed was judged by Mr A Czegledi (Hungary) he placed Ch Debrak On The Road Again (AI) (Ringo) reserve dog and Runner Up Best of Breed. Ringo has taken Best of Breed at this show for the previous 3 consecutive years so adding a runner up best of breed was a great achievement considering he is really badly out of coat. Tambuzi The Isle of Avalon (Arthur) was placed first in the baby dog class (3 entries) and Tambuzi Secret of Roan Inish (Willow) was placed first in the baby bitch class (4 entries). Willow took baby puppy of breed.

The first of the puppies went to their new homes yesterday. After attending the Victorian Basenji Breed Association event at Lilydale lake Emily and Junie took little Newman and Khloe to their new respective homes. They had a very big day with the adults and did very well considering they had not had any lead training. Hopefully the excitement of the day meant that they had a good nights sleep and didn't keep their new families awake! 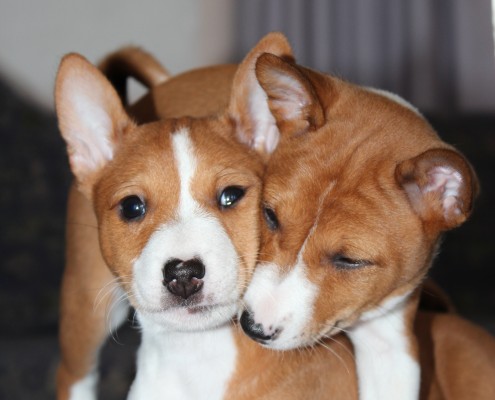 A trip to Melbourne to Dr Robin Stanley today. A nice long trip - the pups slept almost all the way. The screening was conducted through the Australian Canine Eye Scheme (ACES) One pup with normal eyes the others have slight PPM's which Dr Stanley thought would absorb in the next few weeks. All pups with PPMs signed off as being clinically insignificant and will not cause any vision issues.

The puppies had their first vet visit today. Their first vaccination and microchips inserted. DNA swabs were also taken by Dr Sue for parentage verification. The pups took the whole experience in their stride and were paraded around the back surgery for the nurses to see.

Sierra's puppies are living in the lap of luxury. Not one but 3 'mothers'. Sierra is extremely laid back with her fur-kids and it doesn't worry her in the slightest if the other dogs come in for a look. In fact I now have nightly 'fights' as to whom will sleep with them. I've given up trying to explain that they are Sierra's puppies. Halle (grand mother) has particularly taken them in as hers. Halle has even produced milk and is assisting in feeding and her cleaning is, as always, incredible. Meja (great grand mother) also like to nurture, no milk form her - she is a little long in the tooth for that.

The next phase in development is slowly starting. The pups eyes are beginning to open. This leads to further their interaction with one another and their personalities begin to form. Sierra is as patient as ever, lying quietly as a whirling dervish of puppies squirm and prod as they feed.

The puppies are one week old today. They had their dew claws removed last Thursday. Basenji's are generally fantastic parents are Sierra is going with the 'norm' plus. She has no issues with the other dogs coming in to look at her kids. In fact Halle, Sierra'a dam, has rather taken to the pups and whilst Mum feeds them Halle cleans them - Team Tambuzi!

I am pleased to announce that Sierra's litter was born on Monday 24th June 2013 - on time. Sierra is proving to be a wonderful Mum to her 7 babies; 3 tri-colour dogs, 2 red & white dogs and 2 red & white bitches. 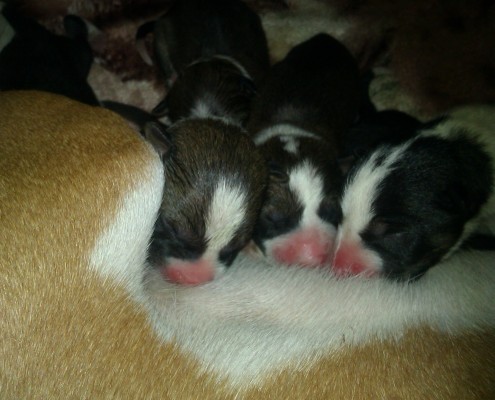