Harry is another Tambuzi with a huge personality. He is a demanding dog in the sense that he adores being with you. Ultimately on you! He will find the smallest spot and somehow he will make himself fit into your chair. Even if that means being upside down or folded into a U shape. More often than not he is sitting under my desk in my office looking at the world go by through the window.

He is playful with Sierra, Halle and Meja. Chase is a favourite game. Lindi doesn’t like to be bothered by such antics. She considers herself too old. Harry is quite considerate of his grandmother’s desire.

He has a strong aversion to some strong smells. He will run a mile at the site of can of air-freshener. On the other hand if you have long recently washed hair be prepared to have Harry trying to make a nest in it.

Harry has been a consistent winner. Runner up best in group (BIG2) and runner up best of breed winner at the Melbourne Royal amoungst many other awards.

He has his own thoughts on how he will show. He doesn’t gait anything like he does in the yard at home. And turns himself into a semi circle when going around the ring pre-empting the circle.

The photos below were taken of Harry winning BIG2 at the Maryborough Show. The tabled photo and head study were taken when he was younger in 2007 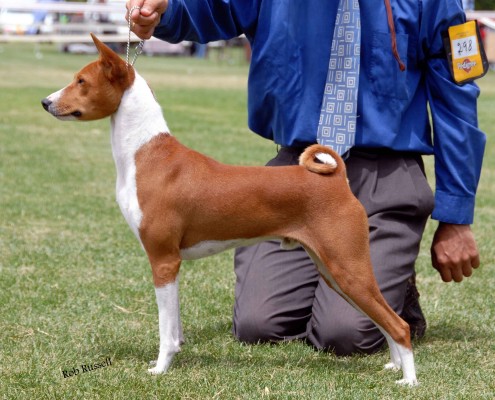