Meja is a very special Basenji at Tambuzi. She is from of the first Tambuzi Basenji litter born on the 16 May 1999. The litter was the result of a frozen semen artificial insemination using Am Ch Jamila’s Madahiro Re (SDHR). An AI litter was another first for Tambuzi Basenjis.

Meja enjoyed great success in the show ring becoming my first champion and first best in group (BIG-1) winner at the same time. The best in group award was a wonderful way to finish her title, especially in view of the quality dogs in the group line up that day.

At 14 years her energy is truly amazing. She is now mistaken for a 5 year old and has the antics of a 12 month old puppy. Observing her mother, opening the fridge is now her favourite game – if only she would learn to close the door!

As a mother she was just fantastic. In fact she baby sat Lindi’s second and third litters and thoroughly enjoyed the puppies trampling all over her. Her quality shines through in her progeny. Seven of whom have gone on to attain their conformation titles. Including Jensen who became a Dutch and German champion.

Most of the photos taken in Meja’s gallery below were taken on the eve of her 8th birthday. 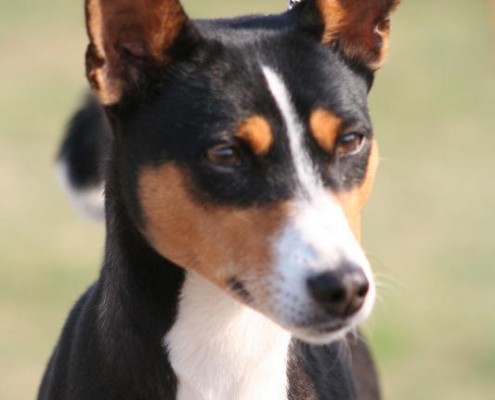