You are here: Home1 / About Me

I was born in England and was brought up in the small village of Toot Baldon (53 households and 136 residents as of the 2001 census) The first church was consecrated in the village in 787 but a settlement would have been on the site for many hundreds of years prior to that. There is evidence of a Roman kiln a few miles away and as kids we often found broken bits of Roman pottery. A Roman road passed by the end of our back garden. 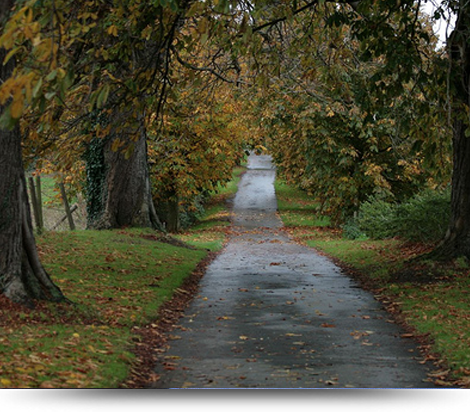 The village was predominantly a farming community; now mostly arable, the area used to be a mix of crops and dairy. Some interesting crop circles have been found over the last few years in the fields.

The village lies in the country, to the south of Oxford, the City of Dreaming Spires; in my opinion one of the most beautiful cities in the world with magnificent architecture. 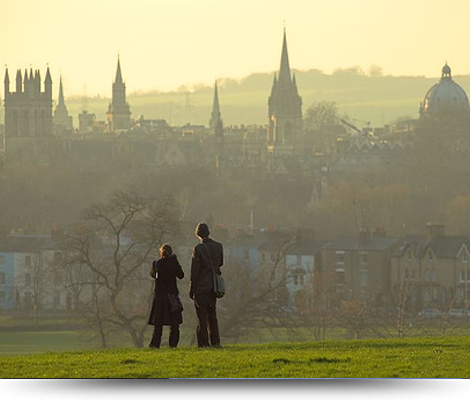 The Town and Gown
Oxford is renowned worldwide for the university which dominates the city. Often referred to as the 'town and gown' the centre of Oxford is full of university buildings which are set around quadrangles where students can sit, relax, read and chat.

The Radcliffe Camera is a library, initially home to the Radcliffe Science Library. The science library was moved and the building has become additional reading rooms for the Bodleian Library. The Bodleian is one of the oldest libraries in Europe. It is entitled to receive a copy of all published works in the UK and those published in the Republic of Ireland.

Tom Tower houses 'Great Tom' a bell recast in 1680. Great Tom is the largest bell in Oxford and weighs over 6 tons.  Tom is still sounded every night when it tolls 101 times at exactly 9.05pm. This signifies the 100 scholars of the original college plus one added in 1663. It is rung at 9.05pm as this corresponds to 9.00pm in what used to be 'Oxford time' (5 minutes later than Greenwhich), and was the time that colleges traditionally locked their gates; basically Tom is massive alarm clock for the students to ensure they were home on time.

Oxford also has some wonderful museums. The University Museum houses natural history; dinosaurs and so forth. The Pitt Rivers archaeological and anthropological exhibits including the macabre shrunken heads.  The Ashmolean Museum of Art and Archaeology is the worlds first university museum.  One of the museums most famous exhibits is the Alfred Jewel discovered in 1953. It was made in the reign of Alfred the Great (late 9th century) and it inscribed "AELFRED MEC HEHT GEWYRCAN",   meaning Alfred ordered me made. The jewel's purpose is unknown and remains a source of speculation. Although it is quite small it has a magnetising effect when you see it. 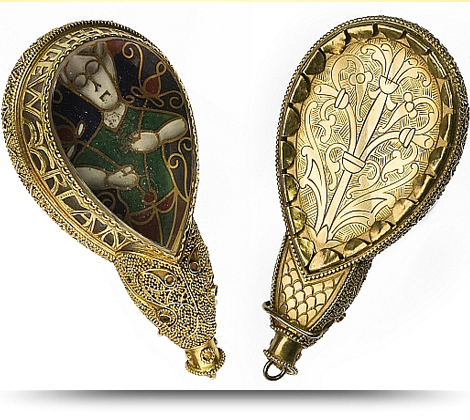 I have been involved with dogs all my life. As a young child our first dog was a Smooth Fox Terrier. Later my parents (in the UK) owned and bred Shetland Sheep Dogs. After immigrating to Australia I adopted a baby puppy from the RSPCA in 1993. Gemma was a mix breed and we enjoyed obedience training. I became involved with Basenjis in 1997. Since then my 'Tambuzi' kennel name currently prefixes 14 confirmation titled Basenjis including Australian, American, UCI International , Dutch  and German Champions and in Australia one Grand Champion and combined Neuter Champion.  I have had the pleasure of assisting friends show their dogs including; Afghan, Beagles, Cairn Terrier, Smooth Fox Terrier, Borzoi, Deerhound, Mini Smooth, Mini Long, Greyhound, Irish Wolfhound, Saluki and Whippet. I gained my Hound (Championship) license in 2009, followed by Gundog, Toy and Terrier groups. I am currently training to judge Non-sporting and Utility Groups.

I currently volunteer in the following capacities:

I was taught to ring at about 13. At St Peters church at Marsh Baldon, the neighbouring village. The church has a 'minor' ring meaning  5 bells. We rang rounds and called changes, with a little bit of 'plain hunt'. The Bells were quite hard to ring, especially the third whose rope was known to often slip off the wheel. Normally this would happen at backstoke. It is an unnerving feeling. One of the bells (#4) was also 'odd struck'. It wasn't until I moved to North Norfolk for work that I continued ringing and learnt change (or method) ringing. Change ringing is the art of ringing a number of bells normally 5-16 (6-8 being the most common) in a series of mathematical patterns called 'changes'. The idea is not to form a musical melody but to ring all possible changes (permutations) possible on the number of bells without repetition. The bells are numbered 1,2,3,4,5,6,7,8..etc (the highest pitch being the #1 or Treble and the lowest being the #8 or Tenor)  There are a few basic rules; a bell may 'move' only one position up or down and it can only stay in the same position a maximum of 4 strokes. Change ringing bells are hung in 'full circle' and have a hand an back stroke - a stroke is when the clapper hits the bell to make the tone.  On 8 bells there are 40,320 possible permutations (1x2x3x4x5x6x7x8). A full peal of all 40,320 changes has been completed once on 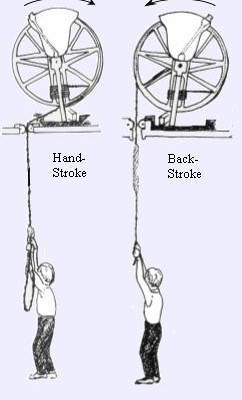 The above image shows a person ringing. There is a large coil of rope at the hand stroke which works onto the wheel as the bell turns in its circle. At the back stroke all of this 'excess' rope is wrapped around the wheel and the persons arms are fully extended as the rope wraps around the wheel.

tower bells in 1963, it took the band 18 hours. A peal must last at least 5000 changes on 8 or more bells, 5040 changes on 7 or less; 5040 being the total possible permutations on 7 bells.
The first true peal was thought to have been rung at St Peter Mancroft in Norwich, UK in 1715. I have never rung a full peal (lasting about 3 hours). I have rung several quarter peals (1250 on 8 or more bells or 1260 on 7 or less, taking about 45 minutes) both in England and in Australia at St Paul's Cathedral and St James Old Cathedral in Melbourne. 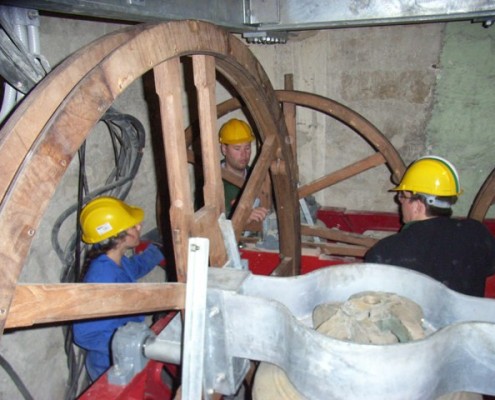 The above image depicts Belfry maintenance. Notice how large the wheels are and the groove in which the rope is held. The bigger the bell the bigger the wheel needs to be. For safety reasons when people are in the bell chamber the bells should be 'down' i.e. the mouth of the bell should be facing down; moving around bells that are 'up' is extremely dangerous. 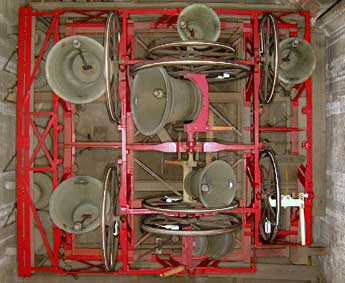 Bells 'up' ready for ringing

A bell chamber with the photo taken from above is pictured above. Bells are normally hung so that they ring in different directions (north/south and east/west) to spread the weight and preserve the structure of the building. If the bells all rang the same way it is likely that the tower structure would be compromised and it would fall down due to the thrust weights. Bells swinging in full circle exert forces of approximately 4.25 times their dead weight in the vertical direction and 2.5-3 times their dead weight in the horizontal. Therefore, bell weighing a ton in weight suddenly becomes a very heavy object whilst in motion.  At least 5 bells in this photos are being rung as they are in various positions in their turning circle. 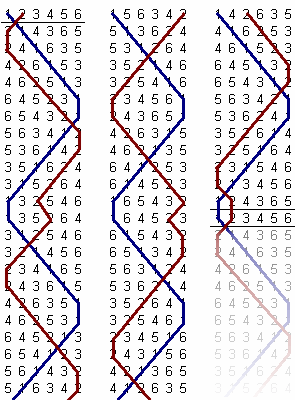 A 'blue line' is used by ringers to keep the pattern or method in their heads whilst they navigate all the permutations. A conductor calls 'bobs' and 'singles' which cause a number of bells to swap 'courses' to prevent a repetition. The above image is the 'blue line' for a method called Plain Bob Minor and below Bristol Surprise Major. All the bells except the #1 (treble, in red) follow the same pattern but each starts their course at a different point in the line. The trebles path becomes a road sign to the other ringers; where each other bell 'passes' the treble (where the blue and red lines intersect) indicates to the other ringers what 'work' their bell should do next. Hopefully, if you get lost you can find the 'calling card' of the treble and get back on track. The image below depicts 230 changes, a 'plain course' of the method.

At 7 years old having moved into the junior section at primary school I learnt to play a few instruments, the usual recorder, glockenspiel etc and learnt to read music. I had been given a trumpet by my grandparents and wanted to play it.

I joined a brass band, the Kennington (Oxford) Youth Band where I learnt to play the cornet, trumpets are not generally played in a traditional brass band. Having difficulty with reaching the higher notes I migrated to the trombone also playing the Euphonium, Baritone and on a couple of occasions the Eb Bass.

In its 'hey day' the Kennington Band was renowned for its concerts and high standard at competition level being 4th Section winners of the British Pontin Championships. The band moved up to the UK 2nd section based on its consistent placings. We toured Europe predominantly Germany, Switzerland, Belgium and The Netherlands where we played at Kerkrade World Music Contest winning a gold medal in our section. We also played in the marching competition, we were not a marching band but did well, a silver medal, not, I think because of the marching ability. We received excellent points for our playing. One of the biggest experiences was marching out into a stadium with about 30,000 people present.

The band made an LP record in 1978 and was invited to play on a compilation LP 'British Brass Bands' in 1983.