Kelele is a Swahili word meaning to shout or make a loud noise, something Kelele was very apt at when she was a puppy. She was bonded with her brother TJ and they were very often found snuggled up with one another. Apart from one day when Kelele went missing, all was strangely quiet. I was in the house the doors were closed so at first I was not concerned by her disappearance. But then hours went by, I had been working at the computer and hadn’t realised how long it had been since I last saw her. Panic soon set in, she was nowhere to be seen. All the usual sleeping spots were empty. I looked under my bed where several boxes were stored – nothing. I searched high and low and eventually went back underneath my bed calling her – nothing appeared. I started to pull things out from under the bed including an old pillow the other B’s had dug a hole in. Still nothing. I placed everything back and then as I placed the pillow back I felt a hard lump. I took off the pillow case and firmly embedded in the hole and inside the pillow case I found a very warm Kelele – still sound asleep!

Kelele had a brief show career as a baby puppy in Australia. Her first all breeds show and a first Best in Show Baby Puppy award. Followed by Baby Puppy in Group at the Hobart Royal Show. Soon after she left Australia bound for America.

Kelele now resides at Samburu Basenjis and I thank Dilys for taking such good care of this special girl. Kelele waited until her first birthday and then finished her title with back to back majors followed a week later by a Speciality Best Opposite sex win! 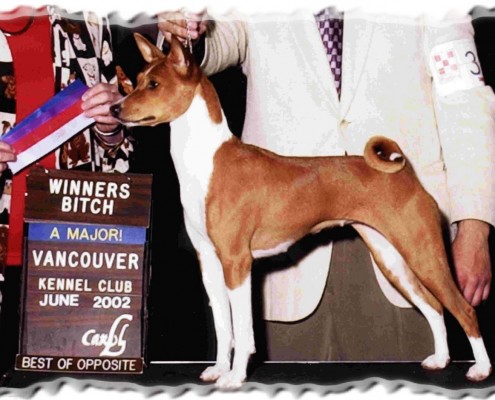