Triton - steadfast and true - the gentleman of the Tambuzi pack. 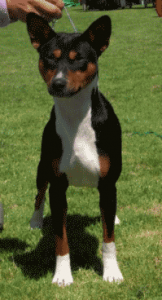 Triton did not like the pomp and ceremony of the show ring and so we made a pact that as soon as he was titled he could retire and stay home to watch over the others. And that's exactly what we did. Never a nasty word, always quite a gentleman. He would not show affection in the company of other Basenjis or wag his tail until he was alone with me. He considered himself 'boss' and a 'true' Basenji, and he considered it not in the Basenji handbook to do that warm and fuzzy sort of thing - at least not in public or in front of the other Basenjis!

He had the most magnificent tri-colour coat with amazingly rich tan. I recall being at the Syndey speciality and one breeder, who shall we say had been in the breed for many years was taking a keen interest in Triton as I waited to go into the ring. I was wondering, with trepidation, as I knew this person did not mince words, what was going thorough said persons mind being totally transfixed so it seemed. Then a  pointy finger and the words "that is the most correctly marked tri-colour I have seen in more than 20 years". I remember that so clearly and considered it a huge compliment.

Triton was diagnosed with cancer in late 2013. A lump being removed from his throat in November and later his tonsils which were considered the primary cancer source. A few weeks later tumours appeared on both lymph nodes. Although my vet had discussed options including chemotherapy, which I wasn't keen to subject him too, it suddenly seemed the only option for his best chance. He had a full blood panel which was all fine and chemo on New Years Eve. I collected him on New Years Day. But a few days later things were not good he had a very high temperature and I rushed him back to the vet. He was placed in a drip for the next 3 days. The tumours had gone, but he was suffering acute renal failure amongst other side effects of the chemo drug. He came home, getting him to eat proved difficult but we got there. He was eating, started playing with the pups and telling them off. But in the space of one afternoon an acorn sized tumour grew under his jaw. Then a heatwave hit. Severe temperatures of 43 degrees, a powercut for almost a whole day after which my air conditioning totally failed. I took Triton back to the vet, he had not eaten for 12 hours and his temperature was elevated. On Saturday 18 January I spoke with my vet, there was a small improvement but he was not well enough to come home. The following morning my vet rang to tell me the terrible news that he had gone out for a final pee before bed late on Saturday night following which he had collapsed and died. He was in the best place and I thank the staff at McIvor ROad Veterinary Centre for their wonderful care. I also thank my neighbours for taking me to  the clinic,  my car had broken down just before new year and of course parts could not be sourced until after the holiday's, and friends for ferrying me to Bendigo and back to go visit and sit with Triton whilst he was under my vets supervision.