I was delighted to be asked to judge the hound group (group 4) at the Berwick and District A&H Society Championship show which took place on the 21 February 2015.  Considering DOGS Victoria has also programmed a double championship show less than 80km away at the Bulla Complex the 542 total entries at this show was an excellent result. General Specials would be judged by Mr W Mooney (VIC)

I was very pleased with the 63 entries in the hound group with Whippets being the biggest breed with 21 entries. Judging commenced at 8.30am, thankfully as it was bound to be a very hot day. I was very pleased to award my best in group to the Saluki, Ch Tiana Cressida owned by A&M Watt and bred by Sue Perkins. A beautiful exhibit, who I had considered for group more than a year ago. The time had given her some maturity and her type, balance, movement and foot fall was first class. She wasn't concerned by the heat. And she had the ring presence to cap off a well deserved win. The Saluki was automatic Best Australian Bred in Group. Runner Up in Group went to the Whippet Ch Rosiel Pax Tothe Rafters owned by N Harris and A Wills and bred by A Wills. He was also form the Australian Bed Class. Best Baby Puppy in Group went to the Rhodesian Ridgeback Kipsigis Chokozi owned and bred by G Jane, surprisingly the only baby exhibited. Best Minor went to the Whippet Ingwe When Irish Eyes R Smilin owned and bred by Ingwe Kennels She later went on to Best Minor Puppy in show. Best Puppy in Group went to the Afghan Alaqadar Wellington owned by C Mibus and bred by Alaqadar Kennels. He went on to be awarded Best Puppy in Show. My best Junior in Group was the Rhodesian Ridgeback Huntingbridge All Overthe World (AI) owned by King & Brennan and bred by D Brennan. Intermediate in Group went to the Whippet Ch Rosiel Royal Secret owned by N Harris and A Wills and bred by A Wills. She went on to win Best Intermediate in Show - the third of my class in groups to be awarded a class in show award, Given Mr Mooney is a whippet breeder/judge this was a very nice result. I later discovered that my Whippet Best of Breed and Runner Up of Breed were litter mates out of NZ & Aust BISS Ch Rosiel Royal Scandal who I have previously awarded top group awards to. Best Open in Group went to the Foxhound Gr Ch Foxgully Perfectly Timed owned and bred by K&K Austin.

I had a wonderful day at Berwick. And was pleased to go over some quality dogs. I was particularly pleased with the whippets with, in my opinion, some very promising young dogs and bitches coming on. 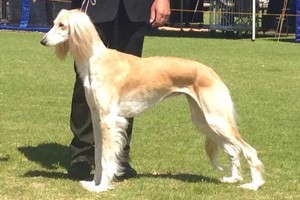 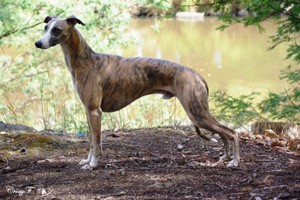