The second of two Dogs Victoria Amenities Shows. The Dogs Victoria New Years Eve Show 2015 commenced early evening. It was a truly beautiful warm evening and one that turned out to be very memorable for Tambuzi. Again the evening was spent socialising around the rings catching up with many friends to celebrate our dogs achievements for the past 12 months. Hound specialist Mr Tony Kyman (Vic) was our judge this evening. Dusk is when my dogs wake up to watch the Kangaroo 'migration' through the property. Lyra was on 'almost' her best behaviour and showed very well. She was awarded Best of Breed and went into the Best in Group ring amongst a number of quality dogs. It was a wonderful and most exciting honour for Lyra to be awarded Best Exhibit in Group (BIG-1) and all at the tender age of 7 months and 2 days old. Later as firework displays were going off in the distance Lyra was awarded Best Minor Puppy in Show by general specials judge Mrs Barbara Doyle (Vic). This was a fantastic conclusion to what was an amazing night and a tremendous year for Tambuzi. Well done to Best in Show winner the Old English Sheepdog MBIS Am Ch & Aust Sup Ch Barkshire's Captain America (Imp USA) and Runner Up Best in Show Winner the English Springer Spaniel MBIS BISS Winner Aust Sup Ch Sandicam The Look Of Love and all the other class in show winners. 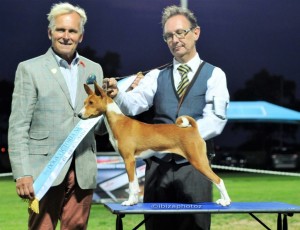 The first of two Dogs Victoria Amenities Show 2015. A night show and what a delightful night it turned out to be after a very hot day. Nice company with many friends at the show. Ms Dianne Lee was our judge this evening. Lyra and Arthur were entered. Breed honours, Best of Breed went to Tambuzi The Secret Society (Lyra) and Ch Tambuzi The Isle of Avalon (Arthur) was awarded Runner up Best of Breed. Aganist some quality competition Lyra was cut for group and was later awarded Best Minor Puppy In Group.

An early start this morning, 8am for the Lancefield Kennel Club Show 2015 way too early for Lyra and myself! Miss Jill McDonald officiated in the hound ring. Today Tambuzi The Secret Society (Lyra) was awarded Best Minor Puppy In Group against some very nice competition.

Where I can I will always support Open Shows and our up and coming judges. Today Mr Bryan Manglesdorf judged the hound group at the Lancefield Open Show 2015. Tambuzi The Secret Society was awarded Best Minor Puppy in Group.

Today at the Kilmore and District Kennel Club 2015 show the hound group was judged by Mrs Barbara Doyle (Vic) who also officiated for general specials. Tambuzi The Secret Society (Lyra)  was awarded Best of Breed and Best Minor Puppy in Group. Very pleased to have the judge give Lyra a good look for minor in show.

Such a lovely day with friends at Maryborough and District 2015 Championship Show. Great company and great food. The hound group judge was Mr Graeme Missen (Vic) who also officiated for general specials. Mr Missen offered extremely positive comments about Tambuzi The Secret Society (Lyra) whilst she was on the table and during judging. Lyra, just over 6 months, old showed well for her class but didn't gait nearly as well as she can for the bitch challenge. She was awarded reserve bitch challenge over two seasoned champions which is very encouraging. Later Lyra went on to be awarded Best Minor Puppy in Group against some quality exhibits. Finally being awarded Best Minor Puppy in Show! Needless to say this topped of what was a fantastic day.

Hound specialist Mrs Gwen Ford (Vic) officiated as the hound judge at the Belgrave and District Kennel Club Show 2015. The weather was a little bit cool but Tambuzi The Secret Society (Lyra) did very well in the baby puppy run off handled by Tony Wills she beat her brother Tambuzi The Master of Ascallon (Gus) who performed beautifully at this his first show. Lyra was awarded best baby puppy of breed and then went up against an absolutely stunning line-up (many breeds represented) of babies for best Baby Puppy in Group. So honored that Lyra was awarded Best Baby Puppy In Group against such strong competition. I was happy with that. But Lyra went one better and under General Specials judge Bev Watt (Vic) Lyra was awarded Best Baby Puppy In Show - so wrapped with that! 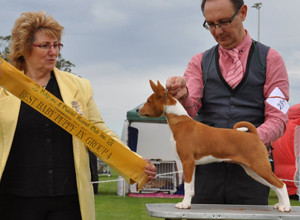 The Basenji Club Victoria Specialty was held on the 7 March 2015. Breed classes and Best in Show were judged by Mrs Noel Baaser (Mutabaruga Basenjis, Germany). Tambuzi was represented by Ringo, Arthur & Willow. Along with Colleen's Ch Tambuzi The Sherpaof Annapurna (Tobi). Also Lisa's Ch Tambuzi The Rinpocheof Qinghai (Ruby). All with respectable results:

Officiating at the South Eastern Kennel Club 2014 championship show for the Hound Group was Ms Mariko Harasa (Japan). From observation it appeared the judge had a keen eye on front construction with correct angulation and good fill, not too narrow and movement. Against lovely competition I was delighted that Ms Harasa awarded all of my entries first in class. With Best of Breed to Ch Tambuzi The Isle Of Avalon (Arthur) and Runner Up Best of Breed and Best Minor Puppy in Group to Ch Tambuzi The Secret of Roan Inish (Willow). Reserve bitch challenge went to Ch Tambuzi The Rinpocheof Qinghai (Ruby)