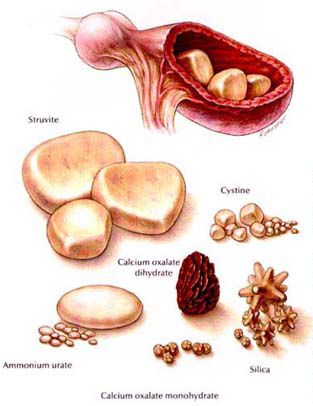 What is Cystinuria?
Cystinuria is a genetic defect. The defect affects the kidney tubules. This in turn affects the kidney's ability to filter cystine (an amino acid). The filtering process prevents this amino acid from going the urine. When this filtering action fails cystine passes into the urine. Over time crystals and/or stones can form. These stones can enter the urethra and cause an obstruction preventing the flow of urine. This form of blockage is more common in males due to their anatomy. Once there is a blockage the bladder is unable to empty. The bladder is likely to rupture which can be fatal.

Unlike other bladder stones, cystine stones will not generally dissolve or breakdown with treatment. There are some drugs that can be given to try and break down the stones. These drugs are risky and are expensive. Drugs are not typically advised unless there are no other options. Generally, the stones are removed surgically.

In Basenjis, the symptoms may present at 17 months-11 years old. Cystinuria has been known in Basenjis for a long time. It is mentioned in the Complete Basenji by Elspet Ford. Although cases are rare this issue seems to be on the increase.

In cases where a dog is diagnosed with this condition but is not presenting:

a special diet may be advised. This diet is usually very low in protein which can help reduce the risk of stones forming. Some supplements can also be administered to reduce the risk of stones forming. In the case where stones have formed usually the only course is to have them surgically removed. Removal will prevent possible blockages in the urinary tract. When a blockage has occurred a process called retrograde-hydropulsion is employed. This process pushes the stone back into the bladder. Once the stone is in the bladder it can be removed.

Once diagnoses the prognosis is generally good. A change of diet is generally recommended. Further testing might be required to ensure that stones do not form. Once removed stones can re-form so continued observation is required.

It seems that most Basenji males block with this condition in the winter months. Basenji males have a season in the Autumn. Basenjis do not tend to drink as much coupled with the holding on (to mark) during the breeding season allows for the urine to be ultra-concentrated during the breeding season. The concentration of urine to any dog predisposed for this issue (has a genetic predisposition) allows for the formation of cystine crystal which then in turn form stones. It is thought that the formation of crystals and stone can take place within a few months hence blockages occur during the winter months. The fact that most Basenjis are house dogs and will hold-on as long as possible because they prefer not to go outside in the cold could also be a factor in the concentration of urine.

Although there is no known prevention as such. Keeping male Basenjis hydrated before, during and after the breeding season may assist with preventing the issue in any that may be predisposed for it. Most Basenjis who have blocked were also fed a kibble diet. Feeding a raw based diet where water can be added to the food to increase the water consumption and therefore the hydration of the dog may also be of some benefit.

It is a good idea for owners to watch all males urinate at least once per day. If the flow is strong then the dog is fine. If the flow is not strong and the dog looks laboured then further observation will be required - remember that during the breeding season Basenjis will urinate a little bit a lot - it is not the amount that is important it is if it's a good stream or a dripping trickle that is important to observe. If the Basenji is generally clean, as most males are, and you notice that his bedding is damp or wet with urine in the morning - observe the Basenji urinating.

Should your Basenji try to urinate and no urine presents and the dog is obviously trying but is unable to go and is uncomfortable the dog may have blocked. If so this is a medical emergency. You need to get your Basenji to the vet immediately. If you do not act quickly this can be a fatal condition.