The Box Hill and District 2014 Kennel Club Inc show was held today. Ms Lyn King (Vic) officiated in the Hound ring. Ms King gave top breed honours, Best of Breed, to Ch Debrak On The Road Again (AI) (Ringo). Not to be out done his daughters were also recognised.  Runner Up Best of Breed went to Ch Tambuzi The Rinpoche of Qinghai (Ruby) owned by Lisa-Jane Hunter and reserve challenge to Ch Tambuzi Secret Of Roan Inish (Willow). 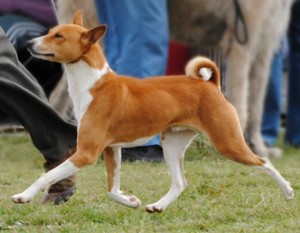 Ringo gaiting at about 12 months old

The kennel is very honoured with some wonderful critiques.

Hound specialist Ms S Cameron-Codognotto officiated today. Best of Breed went to Ch Tambuzi The Rinpocheof Qinghai (Ruby) and Runner Up Best of Breed to her sire Ch Debrak On The Road Again (AI) (Ringo). Tambuzi The Secret of Roan Inish (Willow) was awarded her 7th Best Baby Puppy In Group, it will be her last in the class as Willow will go up into the Minor Puppy class at the next show.

Today the Hound Club of Victoria’s Championship Show attracted 290 entries. Basenjis were in group 4C which was judged by Ms D Malenfant (USA).  Ch Debrak On The Road Again (AI) (Ringo) won reserve dog. Ringo was Best of Breed winner at the Hound Club of Victoria in 2010 and 2011. Ch Tambuzi The Rinpocheof Qinghai (Ruby) took out the bitch challenge. She followed this up by winning Best of Breed. Ruby had won best baby puppy in show at the 2012 show. Tambuzi The Isle of Avalon (Arthur) won the baby puppy dog class. Arthur’s litter sister Tambuzi Secret of Roan Inish (Willow) won the baby bitch class. Both wins against competition.  Willow took out best baby of breed and was pulled out with the Basset Hound for best baby puppy in show – she was pipped to the post by the baby Basset. Ruby was also pulled out for best junior in show so all in all it was another day for the team!

On Saturday 2 November we attended The Hound Club of Victoria’s annual twilight show which is now in its 3rd year.  Exhibitors attended from most states and territories. The number of entries this year – 279 dogs. Basenjis were in group 4c and were judged by Mrs M Pereira (Brazil). Watching Mrs Pereira judge it seemed she concentrated and rewarded dogs that excelled in correct front and rear angulation and dogs with good muscle definition. Team Tambuzi were rewarded with dog challenge and Best of Breed being won by Ch Debrak On The Road Again (AI) (Ringo) and bitch challenge and Runner Up Best of Breed being won by Ringo’s daughter Ch Tambuzi The Rinpocheof Qinghai (Ruby). Ringo was Best of Breed winner at the Hound Club of Victoria in 2010 and 2011. Ruby took Best Baby Puppy in Show at the Hound Club show in 2012. Could not have asked for more from the kids tonight!

Mrs B Doyle (Victoria) judged the Hound Group. It was good to see that the baby puppies were at last beginning to realise that they can actually walk and even managed to gait albeit for only a few steps here and there. Tambuzi The Isle of Avalon (Arthur) was placed 1st in a class of 3 baby dogs. Tambuzi Secret of Roan Inish (Willow) followed in her brother paw prints and was placed 1st in a class of 4 baby bitches. Arthur eventually went on to beat his sister for baby puppy of breed. Ch Debrak On The Road Again (AI) (Ringo) took out the dog challenge and his daughter Ch Tambuzi The Rinpocheof Qinghai (Ruby) won the bitch challenge. Ringo went to Best of Breed and was pulled out for group – even though he was being a real terror.